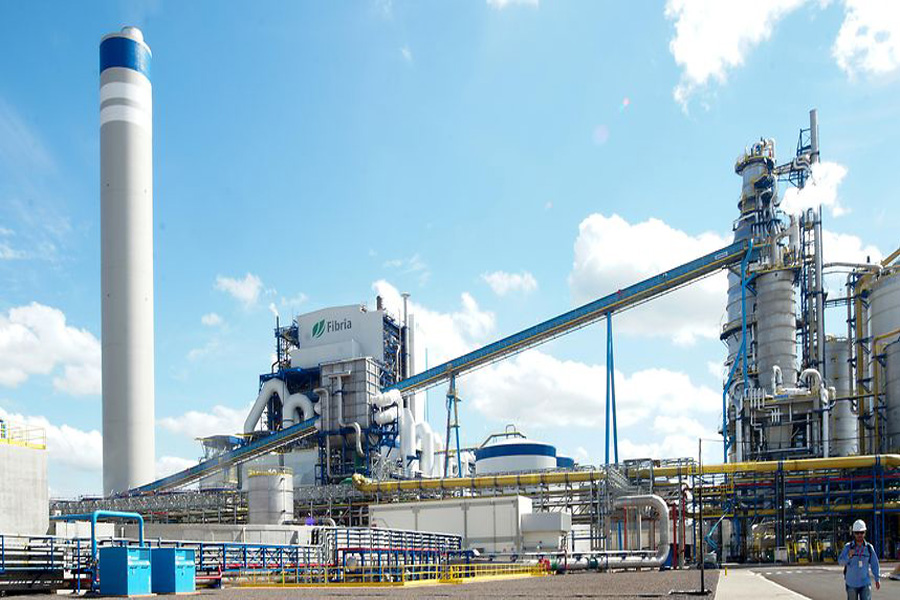 In modern paper and pulp mills, technology, sustainability, and profitability form a dynamic entity. With its globally proven technologies and digital solutions, ANDRITZ is actively driving this development and setting standards for the performance of the machines supplied and processes established as well as for efficient use of energy and resources. For example, wood as a raw material and all of the resources used in production are used to optimum advantage and also recycled.

ANDRITZ supplied one of the largest recovery boilers in the world for Fibria’s second pulp production line. The latest technology minimizes emissions and generates “green” electricity by fully utilizing the residual materials from pulp production. This makes the mill self-sufficient in energy, and it can even deliver surplus power to the public grid.

The ANDRITZ DD-Washers for Fibria’s second pulp production line in Três Lagoas are the world’s largest. They provide low operating costs, very high washing efficiency, and excellent fiber quality. The fiberline has the highest single-line capacity in the world.

Emissions and waste streams can be reduced significantly, and the energy balance is positive, which means that surplus electricity is produced in pulp mills that can be fed into the public grid.

Três Lagoas is a small town in the Brazilian state of Mato Grosso do Sul. Although the location may seem rather unimposing at first glance, it is all the more impressive when you take a closer look: Fibria, the world’s largest producer of market pulp, started up one of the largest and most advanced pulp mills in the world here – supplied by ANDRITZ – in August 2017, ahead of the scheduled date. The second pulp production line sets new standards in many respects. With an annual production capacity of 1.95 million tons, this plant exceeds even Fibria’s ambitious plans: The company had originally intended a maximum production of 1.75 million tons for the new line in the eucalyptus pulp mill. ANDRITZ supplied all of the technologies and systems for the plant, which can produce 3.25 million tons of pulp a year together with the existing mill. Fibria thus has one of the largest and most efficient pulp production locations in the world.

And the second pulp production line also sets an example when it comes to logistics: there were up to 6,300 employees working on the site under ANDRITZ’s supervision, and goods had to be transported over a total of 2,650 kilometers in Brazil alone during the building phase. Nevertheless, the plant went into operation right on schedule.
World's biggest chippers

State-of-the-art online monitoring of the woodyard with ANDRITZ IIoT solutions. The entire production process is monitored and controlled from a central control room. The world’s biggest chippers (photo), each with a diameter of 3.87 meters, and the three debarking and chipping lines with the largest capacity worldwide are also monitored online by video cameras.

ANDRITZ supplied key machinery and technology for the mill: for example, three debarking and chipping lines with the highest capacity in the world, the softwood and hardwood fiberline with the softwood fiberline capacity being the world‘s highest, the world’s most energy-efficient evaporation plant, and one of the world’s largest recausticizing plants in a single line.

Smooth plant operations are guaranteed by the latest control technology. The key element is a digitally networked central control room with large screens, where five or six experts monitor mill operations. On their daily tours of the mill, the staff use a tablet PC to check the output of the pumps for example.

The latest ANDRITZ IIoT solutions are implemented at the bioproduct mill, such as the Decision Support Wall at the woodyard control room. This online tool contains live videos of processes and equipment, indicates actual or potential problems, and has automatic reporting and alarm triggering functions. The Metris Process Traffic Lights tool, which displays warnings in different colors according to the defined criteria in a specific sector, will be installed in the near future.

Other applications are in the planning stage: They include live video streams of sub-processes in production, for example, which are recorded by a helmet cam, and the use of augmented reality by means of smartglasses. The smartglasses are used to display documentation and checklists in a technician’s line of vision so that he can pinpoint problems accurately right at the mill itself and eliminate them swiftly.