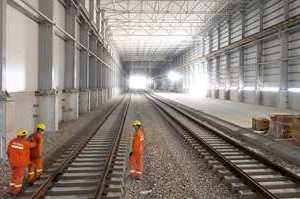 Significant infrastructure developments in port and railway operations are underway in Uruguay as construction of the UPM Paso de los Toros pulp mill progresses. We have an update on how the work is proceeding.To ensure the efficiency, speed and safety of pulp transports from Uruguay to global markets, UPM is building a new pulp terminal at the Montevideo port. An improved and partly rebuilt railroad will connect the new mill near the city of Paso de los Toros in central Uruguay to the capital.

After two years of construction, the terminal building is nearly ready, says Javier Solari, Vice President of the UPM Uruguay Development Project, speaking to us this April. Open 24/7, the terminal can handle over 2 million tonnes of pulp annually. UPM will operate it on a 50-year concession.

“At the peak of construction, we had 500 people working on site, and currently have about 400 workers. Apart from dredging and some automation, electrical and piping installations, everything is nearly done,” Solari says.

Major storage and loading areas
A total of 50,000 m2 of warehouse space – enough to store 140,000 tonnes of pulp – has also been built along with the terminal. Expanding the current dock will allow Panamax (length 294, beam 32, draught 12 m) and Post Panamax (length 366, beam 49, draught 15 m) sized vessels to enter the port for cargo loading.

“The whole construction process happened in a public space, inside a busy working port. We were never alone, and the port traffic created challenges in scheduling the work to minimise distractions,” Solari describes the special characteristics of the building process.

The project also includes constructing a 12,000 m2 roofed loading area, which will allow loading and unloading of cargo directly to vessels in all weather conditions. Utilising a railway to transport pulp from the mill will be a significant advantage. Five rail tracks will lead directly to the dock, of which two are used for pulp, one for chemicals, and the others for shunting and as spare tracks.

Impact on entire export sector
The rebuilding of the railroad leading from Paso de los Toros to the capital is one of the most significant infrastructure projects in the country’s history. The railway will be 273 kilometres long and run as a double rail for the first 36 kilometres from the Montevideo metropolitan area.

Although UPM has been the initiator in the construction of the railway, it will be state-owned and open to other users as well, including passenger trains. UPM estimates it will run seven daily trains, each carrying 1,664 tonnes of pulp.

The railroad is part of the Uruguayan government’s infrastructure plan, executed as a public-private partnership. The existing railroad was outdated and not much used, so along with the railway 246 level crossings, 66 railway bridges and 25 stations and passenger stops are being built.

The railroad construction and maintenance for 18 years were awarded to the Grupo Via Central consortium, led by Spanish construction firm Sacyr. The operating company providing the freight services will be a consortium led by Deutsche Bahn International Operations. At the beginning of 2022, approximately 30% of the railroad was finished, meaning the project has been delayed from the initial schedule but is expected to be finished by May 2023.

Solari, speaking not only as a committed UPM professional but also a native Uruguayan, sees that the infrastructure project has a significant impact on the whole country.

“The Port of Montevideo has always been a driving force for the economy. The connection via railroad will benefit the whole export sector of Uruguay and its supply chain. The railway is also a safer and cleaner method of transport,” Solari sums up.