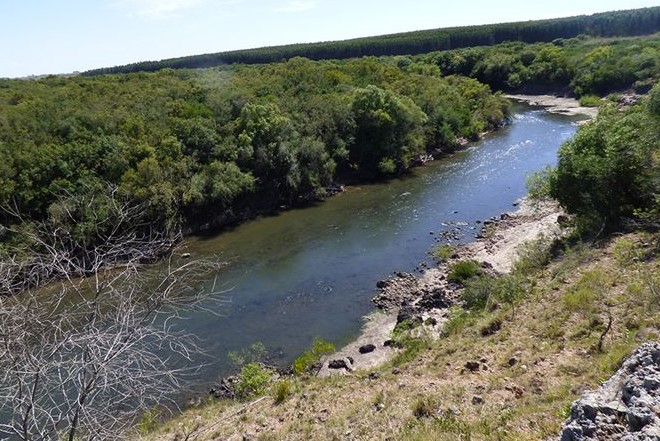 Through the restoration of its native landscapes in western Uruguay, UPM is demonstrating how conservation comes in many different forms.

A scrubby piece of high grassland that overlooks the Queguay River and an extensive area of natural forest in the western Uruguayan province of Paysandú is home to something truly unique.
Among the 320 species of plants and animals that inhabit this characteristic landscape of western Uruguay is the chestnut seedeater.

This small and endangered species of migratory bird, which primarily eats seeds from tall grasses like Paspalum spp. comes each spring and summer from Brazil to reproduce in the disappearing landscapes typified by El Retiro, a UPM conservation area on the frontline of protecting this endangered bird and its unique habitat.

“El Retiro has a characteristic landscape of this region of the country,” says Carlos Brussa, an agronomist specialised in botany and the former director of the Botanical Museum and Garden of Montevideo.

The 1100-hectare conservation area spans from the basalt outcroppings of the Queguay geological formation and gives way to rocky fields with alkaline soils derived from the Cretaceous sandstones that are practically exclusive to the country's western coastline on the Uruguay River.

It is here, the unique high grasslands and native forests are found, boasting 190 species of plants and 130 species of animals.

Starting in 2011, UPM set aside this piece of its plantation lands in order to preserve the natural landscape, recognising the importance of restoring the area, which had been over-grazed and with an incipient alien plant species invasion.

“A landscape approach is the key,” says Ivan Grela, Environmental Affairs Coordinator at UPM Forestal Oriental. “We understand that in the long-term plantations need healthy ecosystems around.”

Restoration of a fading landscape

In order to return El Retiro to its natural state, UPM immediately set up a programme to remove invasive tree species and manage the grazing of the high grasslands. Based on its active monitoring of the site, Grela says these programmes have been a success so far.

“[El Retiro is] in a very good state of conservation, with an interesting richness of species as well as the presence of several species of priority flora and fauna for conservation, according to the National Environment Office,” says Grela.

The chestnut seedeater is high up on that list.

Brussa, who receives reports from a team of researchers that check up on El Retiro, agrees that UPM’s conservation practices have helped restore the environment to more natural conditions.

“El Retiro has adequate management of the representative areas, as it arises from recent reports (M. Díaz and F. Muñoz, 2019; P. Brussa and E. Walker, 2019) in which the good state of conservation is established from natural pastures, as well as from the native forest,” says Brussa.

“The management provided [by UPM] to this type of grassland differs markedly with the traditional historical practices of the country and the region,” he adds. “It seeks to avoid overgrazing, as well as erosion due to excess number of cows and fire is not used as an element to ‘rejuvenate’ pastures and ‘clean’ fields.”

Historically, cows had free range to graze in the high grasslands of El Retiro. Combined with other previous agricultural activities, the cows helped to spread several invasive species of trees, including the North-American native Espina de Cristo (Gleditsia triacanthos)

“Its sweet legumes are highly prized by cattle, which disseminate the seeds with their faeces, forming forests of this invasive species and gradually displacing native trees,” says Brussa.

UPM now controls when the land can be grazed, which stymied the spread of the invasive species and maintains the rich diversity of endemic flora and fauna.

“The management of rotational grazing, adjusting the livestock loads at different times of the year, allows the balanced presence of grasses of different heights of leaf horizons, favouring the greater diversity of species of the natural field,” Brussa says.

Bringing the chestnut seedeater back from the brink

Practices such as this one will help protect the chestnut seedeater and other similar bird species. The small birds rely on these tall grasses to provide them with somewhere to hatch and shelter offspring; something that over-grazing had previously prevented. In turn, the birds help to spread local plants to areas where they can successfully grow again.

“A special area for differential grazing management was delimited with the objective of facilitating the arrival and reproduction of the Chestnut seedeater species, which is in danger of extinction,” says Grela.

It is with measures such as this one that, Aves Uruguay, an NGO, and UPM hope to reverse the fortunes of the Chestnut seedeater. Starting in October, researchers from Aves Uruguay headed to El Retiro in order to count the birds and, hopefully, document their revival.

In the meantime, UPM will continue carrying out its conservation plan, allowing the native species of El Retiro to flourish and demonstrating that there is no one-size-fits-all approach when it comes to conservation.