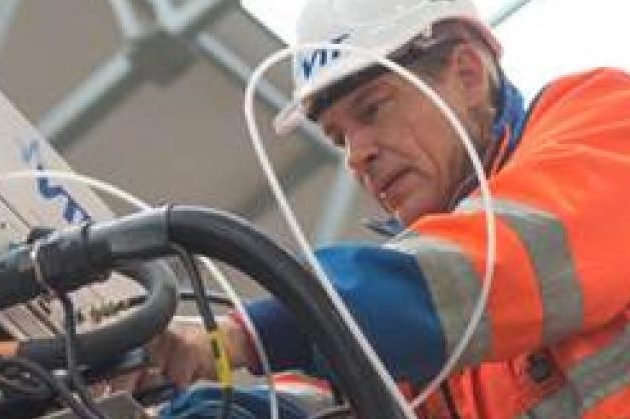 The test in the Vuosaari Harbour focused on measuring the tailpipe emissions of a Volvo wheel loader. Both the nitrogen oxide and particle emissions were around 10% less when compared to a fossil reference fuel.

"The average load of the wheel loader during the test was low. Heavier load would have produced more particles, and there would probably have been greater reduction in particle emissions while using the renewable diesel," estimates Nils-Olof Nylund, Senior Advisor at VTT, the VTT Technical Research Centre in Finland.

The results of emission tests also depend very much on the type and age of the engine.
"In previous engine tests, we have reached reductions of up to 30-40% in tailpipe emissions with UPM BioVerno compared to fossil fuels. During its lifecycle, our renewable diesel reduces CO2 emissions by 80%," says Sari Mannonen, Vice President, UPM Biofuels.

The wheel loader tests using UPM BioVerno diesel were carried out in the harbour at the end of last year in collaboration with Oy M. Rauanheimo Ab and VTT as part of the Bio100 project. Helsinki Region Transport (HSL) and Helsinki City Construction Services, Stara, have a common aim of achieving emission-free city traffic. Bio100 is part of the Smart & Clean project which aims to provide the world's most attractive emission-free mobility in the Helsinki Metropolitan Area.

High quality sustainable biofuels are a cost-efficient alternative to help reduce traffic emissions and they can be adopted without any changes to vehicles. UPM Biofuels participates in Bio100, a four-year project co-ordinated by VTT with the goal of increasing the share of biofuels used in combustion engines in Helsinki area to at least 50% by 2017 and to 70-90% by the end of 2019.

"We are planning to continue off-road vehicle tests during spring at the Kaukas mill integrate in Lappeenranta, where the biorefinery producing UPM BioVerno is also located. In accordance with UPM's new brand promise, 'Beyond fossils', we are replacing fossil raw materials with renewable, wood-based solutions," Mannonen concludes.